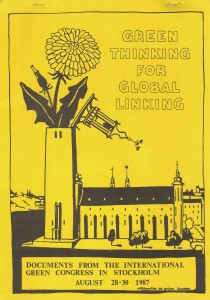 “Green is the societal answer to the dangers of existential destruction and to the new miseries of our time” (Freda Meissner-Blau). Die schwedischen Grünen, die miljöpartiet de gröna, organisierten im August 1987 “Green thinking for global linking”, einen internationalen grünen Kongress in Stockholm, an dem über dreihundert Personen aus drei Kontinenten teilnahmen: “It showed the world that we are many, we are serious, we belong to a global movement and our issues are being responded to in one country after another”, lautete das Resümee in der  Broschüre zur Tagung. Aus Österreich nahmen Andrea Binder, Christian Burtscher, Doris Eisenriegler, Helga Erlinger, Ali Gronner, Gerhard Jordan, Freda Meissner-Blau, Werner Moidl und Christian Wabl teil.

//zitat// Dear European green friends! I am looking forward to the day we can address a conference like this one with “Dear INTERNATIONAL GREENS!” Oecause we need to extend internationally. As the environmental destruction, catastrophies, their causes and their repercussions increasingly become global, our resistance and our alternative projects to the crisis have to become world-wide. Instead of a nuclear chain reaction we have to build up a chain of opposition to their irrationality.

Before we enter the discussion about ideology permit me a personal remark: Austria, my country, has lately attracted attention due to 2 facts: Firstly, we paid ourselves the dubious luxury of having a President, who is a big embarrassment. We, the Greens, managed to prevent his being elected at the first election round, but could not prevent him alltogether – a fact a considerable number of Austrians seem to regret today.

The other fact is a more encouraging one: as like to express it – and as you might know – Austria is the country with the safest nuclear reactor, with the only truly safe nuclear reactor in the world. Safe, because it never started up, because the Austrian people said No thanks to nuclear energy at a referendum in 1978 . Nuclear energy is banned ever since for the production of energy in our country. Why do I mention this? Because the man who spoke to us at noon, Hannes Alfvén, helped us, the anti-nuclear movement of Austria, to get the message across to the people that atomic weapons and nuclear energy are siamese twins. Time and again he came to our country to explain, to warn, to lecture. So you see, Sweden has played an up till now unknown part in the fact that Austria is a nuclear-free country. This is a beautiful example of the kind of green internationalism I claimed at the beginning…

Now at last to the question if I believe a green ideoloqy exists.

I am tempted to say no: GREEN IS MORE THAN AN IDEOLOGY! The ideologies we know, be it conservatism, liberalism, communism, fascism or socialism concern primarily specific social groups or classes, claiming improvement, mostly material or civic liberties, for these groups. But what unites us here in this room, Greens from all over Europe at this conference, is more than a wide stream of ideas. It is the essential question, the existential question of the survival of life on our planet. It concerns humankind at large. GREEN means asking the question of HOW DO WE WANT TO LIVE, it is the conviction and the insight that we, as human beings, are part of the nature around us and that the preedominant and progressing exploitation of men and of our natural and emotional environment as the result of the aggression of a military-industrial system gone wild has to be stopped. 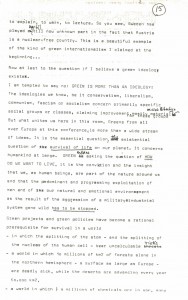 We know all that and more than that. Once we were told that knowledge is power. We have learned since, that mere knowledge of disaster does not change a thing.

I am not an adept of the rhetorics of doomsday catastrophies and I do not believe that fear and fright are the good tools in politics.

Green is the societal answer to the dangers of existential destruction and to the new miseries of our time.

Just as the labour movement came into being 150 years ago as a reply to the poverty and misery of the proletariat of early industrialization. But the labour movement in my country has since become an integrated part of the military industrial establishment and has long forgotten its ideals and theories and has failed to be a motor for social change. It is the task of the Greens to come forward with alternatives for the necessary socio-ecological reconstruction of our economy and for a life in accordance and in harmony with the laws of nature and in accordance with human needs. (C. F. Schumacher called it TLC – tender loving care, words difficult to pronounce…)

To develop the necessary programmes which go beyond our practical political actions and at the same time to develop the underlying theories as foundation for our political task, can only be the work of many. This conference will certainly contribute to it.

Yet we must not forget: we are faced with the relentless force of those in power, politically, financially, and economically.

We owe them our disobedience

We owe them our disobedience. As Erich Fromm said in one of his essays: This history of humankind began with an act of disobedience against the will of God (you know, the story of Adam and Eve, with the apple from the tree of knowledge…).

Today, humankind is in danger to disappear, to be annihilated, by an act of obedience. Obedience to the established powers, the God of power.
We, the Greens, will make sure, that this sort of obedience is refused! Now and as long as necessary. Thank you. //zitatende//